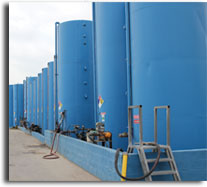 ULSD fuels are inherently unstable and are more affected by thermal stress. They are more prone to water separation and microbial contamination. These problems have impacted fuel storage life, making it shorter than in previous generation fuels.

Water has always been a problem in diesel fuel, but the problems have never been more rampant than with ULSD fuel. Sulfur dissolves and carries water out of fuel systems. Lower sulfur content has reduced both the fuel’s natural ability to carry water and its resistance to microbial contamination. 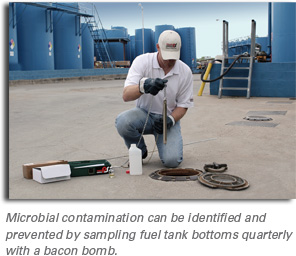 Since the fuel can no longer carry water dissolved in solution, more water is shedding to the bottom of fuel tanks, creating a life-support system and breeding ground for microbes. Paraffin content has increased as sulfur and aromatics decrease, providing a major food source to microbes. Additionally, sulfur is a natural poison to bacteria and fungus, and its reduction has further exacerbated microbial contamination problems in ULSD.

Microbes normally invade the water found on tank bottoms and easily become established in as little as one to two months. They grow on all interior surfaces of the fuel tank by encasing themselves in their own excrement, which is seen on fuel-filters as a black or brown slimy or mucus-like substance. The excrement is acidic and causes corrosion that can lead to failure of pumps, level detection devices and tank leakage. Plugging of fuel-filters on both dispensers and equipment is usually the first sign of microbial contamination.

Clear Liqui-Cult
Microbial contamination can be identified by injecting a 5cc sample of fuel into a Liqui-Cult fuel test which provides a food source for microbes if present to grow within 72 hours.

Red Liqui-Cult
The Liqui-Cult will turn red after 30 hours if the fuel sample is contaminated with bacteria.

Fungus Liqui-Cult
The Liqui-Cult will grow fungus after 72 hours if the fuel sample is contaminated with fungus.

Microbial contamination can be identified and prevented by sampling fuel tank bottoms regularly and using two fuel additives.
Bio Kleen® Diesel Fuel Biocide is a highly active (86%) dual-phase biocide effective in killing bacteria and fungus in both the diesel fuel and water phases – dual-phase biocides are recommended by OEMs to provide the most effective kill. 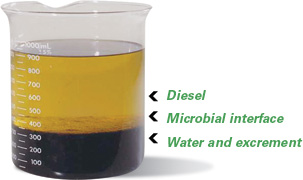 Clear-Diesel® Fuel & Tank Cleaner should be used in conjunction with Bio Kleen to provide the most effective clean-up. Bio Kleen kills the microbes while Clear-Diesel cleans the fuel tank by dispersing both the water and excrement, exposing the microbes to the biocide for a faster and more effective kill.

Clear-Diesel helps prevent the common need to change plugged fuel-filters when using only a biocide. Clear-Diesel also contains +Petrofresh® which provides maximum long-term storage stability, keeping the fuel clean and fresh, and minimizing the formation of asphaltenes at elevated temperatures.

While ULSD has ushered in a number of problems in fuel tank storage systems, with proper maintenance and treatment, these problems can be prevented. And once a fuel system is clean, it is ready to be treated for maximum performance and operability.